Thousands of workers across the country took action to demand a $15 minimum wage and other workers’ rights issues, for fair schedules, union rights and paid sick time.

In many cities, workers squarely addressed the political inaction of elected officials. Hundreds flooded into city hall or rallied in front of government buildings, to demand that local and state governments, who’ve been under enormous pressure from these rolling and escalating demonstrations and strikes, take urgent action on $15.

Here are a few highlighting reports from 15 Now members organizing across the country:

15 Now Philadelphia
Today in Philly dozens of fast food workers walked off the job at 6am. After a 6am strike line at a North Philly McDonalds, workers staged actions at fast food restaurants across Philadelphia. At noon, fast food workers joined janitors organizing with the Service Employees International Union (SEIU) to march on Comcast to demand $15 and a union for all Comcast workers. They attempted to enter the Comcast tower but were denied entrance by police.

The main action was a large march from City Hall to a McDonalds in Rittenhouse Square. About 400 people, including progressive City Coucilwoman-elect Helen Gym and State Senator Daylin Leach, who had introduced a statewide $15 minimum wage bill, were joined by teachers union and service worker union leaders. We took over the open-air center of City Hall and marched down Broad street. The march was high energy.

15 Now member and Temple student Zoe Buckwalter closed the rally with a call on Philadelphia’s incumbent Mayor and City Council to take immediate action as soon as they take office to introduce binding $15 minimum wage legislation January 2016 and talked about the ongoing campaign at Temple to win $15 for security officer, cafeteria workers, and student workers.
Watch Video of Lancaster, PA Subway worker #15Now

15 Now NJ
A few weeks after two county legislatures, the Essex and Hudson Boards of Chosen Freeholders, passed a resolution calling on the New Jersey State Legislature to raise the minimum wage to $15/hour, the momentum to fight for $15 was strong in Jersey City.  Despite the rain, dozens of workers and students gathered at Jersey City’s City Hall for a rally.  Later, Jersey City’s City Council voted to support a statewide $15/hr minimum wage and Mayor Steve Fulop came out in support of the measure.  Local organizing and the national #Fightfor15 movement has seriously shifted the conversation about poverty and inequality in New Jersey.
Check out this article covering the demonstration

15 Now PDX (click for full article)
In Portland, OR hundreds of people marched and rallied for $15 and a union as part of the national day of action. The rally highlighted local janitors and homecare workers, who raised their voices to demand a $15 wage. There are about 9,000 janitors and homecare workers in the Portland area who still don’t make $15. They are being supported by the Portland Area Campaign for $15, a coalition made up of Portland Jobs of labor and community groups, including 15 Now PDX, that is working to raise wages to $15 for 30,000 Portland area workers by 2017 through contract negotiations, voluntary commitments, and new organizing campaigns.

At today’s Dia de Los Meurtos themed rally, workers and allies marched around the Pittock Building chanting to draw down good jobs with living wages. Earlier this year the Pittock Building began hiring out it’s janitorial services to a low-wage, non-union contractor. The building has been the site for other $15 and union protests over the past year.

15 Now Northwest Wisconsin
At 4:00 pm on Tuesday, November 10th, the Eau Claire Area School District’s Hourly Compensation Committee met at the school board office. The school district’s recently completed compensation study showed that many workers are underpaid, well under $15 an hour, though the administration has decided to withhold the annual inflationary wage adjustment of 1.67% to it’s lowest paid workers.

Members of 15 Now Northwest Wisconsin attended this meeting to demand that the ECASD administration grant this inflationary wage adjustment to all workers making less than $15 an hour. 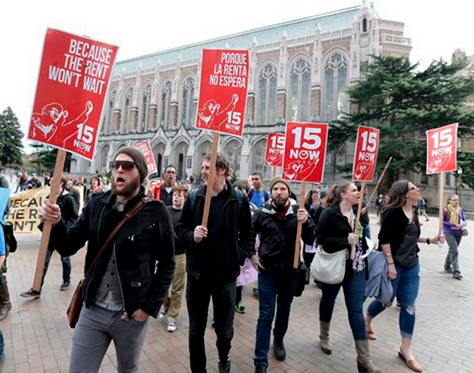 On April 15, over 60,000 union members, students and low wage workers in 230 cities across the country walked out of their work places and classrooms to march, rally and occupy for a $15/hour minimum wage and the right to a union. SEIU played a key role in providing organizing resources, organizers and mobilizing it’s membership to come out for the day of action. With its focus on building a broader campaign, 15 Now also played a critical role in mobilizing, organizing and supporting the strikes and direct actions.

END_OF_DOCUMENT_TOKEN_TO_BE_REPLACED

On April 6, students at Northeastern University made history by winning a student referendum vote to implement the nation’s first campus-wide $15/hr minimum wage.  The initiative passed with 76.4% of the vote.

Not only did these students break ground nationally by becoming the first campus to demand $15, they broke ground at Northeastern by smashing all previous election records.  While the referendum does not immediately raise wages for campus workers, it shows a clear mandate to address the issue of income inequality on campus and forces the Administration to act.

With a coalition of 9 progressive student groups on campus, 15 Now Northeastern is poised to put their university on the front lines of the fight for wage equality nationwide. Northeastern students are speaking out and fighting back against wage inequality on their campus.

“There’s an unusual buzz on campus,” says Elan Axelbank, a Northeastern student and one of the main organizers of the campaign.  “You’d be walking around campus during voting week and just hear random groups of people talking about 15, it was awesome.”

We need to build on this victory by spreading 15 Now to every campus, city and neighborhood in the country.  The movement for a living wage is growing and winning more and more victories every week.  On April 15th, workers, students, and community members will be marching in over 200 cities nationwide to demand $15/hr for all workers.

Join 15 Now in marching on this national day of action – RSVP here.

Want to start a 15 Now chapter on your campus or in your neighborhood?  Contact 15 Now Northeastern at 15nowNU@gmail.com or 15 Now national at info@15now.org.

Seattle’s Getting a Raise!

Last year Seattle made history by becoming the first major city to pass a $15 minimum wage for all workers, raising the wages for 100,000 workers. This historic victory kicked open the door for other major cities like San Francisco to follow, with communities rising up and demanding a $15 minimum wage in cities near and far from Portland to Minneapolis.
END_OF_DOCUMENT_TOKEN_TO_BE_REPLACED